FOLK MEDICINE – Chicken-pox
Go into the chicken house and let the chickens fly over you, or simply push the patient backward into the henhouse.

To cure Chills and Fever
Cut a notch in a piece of wood for every chill you have had, blow on it, and throw it into a running stream where you never expect to pass again. Go home without looking back, and you will have no more chills.

Often based on religious beliefs, these practices are used to cure diseases and promote emotional and physical well being. The practice of folk medicine is usually handed down from generation to generation by word of mouth. In general, this system was used because traditional medicine failed to support blacks and poor whites.

Traditional African medicine is a holistic discipline involving extensive use of indigenous herbalism combined with aspects of African spirituality.

Famous Bedik diviner just outside Iwol, southeast Senegal (West Africa) He predicted outcomes by examining the color of the organs of sacrificed chickens. The person consulting him here came all the way from Dakar --- a long trip (Photo credit: Wikipedia) 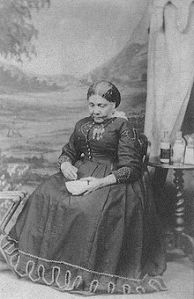 Florence Nightingale and Mary Seacole, Jamaican healer or ‘doctress,’ were contemporaries noted for their nursing care of soldiers during the Crimean War. Why, then, is Nightingale celebrated and Seacole all but forgotten?

What can Florence and Mary teach us about nursing today?

Born April 16, 1845. In Boston, Negro children were not permitted to attend schools with Whites until 1855, and domestic service was the only way for a Negro woman to make a living. Interested in a nursing career from the age of eighteen, Mary was a “nurse” for several prominent white families prior to entering formal nurse training. On March 23, 1878, she was the “first coloured girl admitted” (Medical and Nursing Record Book, 1878) to the nurse training program at the New England Hospital for Women and Children; she graduated sixteen months later at the age of thirty-four.