City of Philadelphia is a UNESCO Site of Memory

The City of Philadelphia is one of 31 documented U.S. Middle Passage Arrival Sites recently approved by the UNESCO Slave Route Project as “Sites of Memory” associated with the Transatlantic Slave Trade. “Sites of Memory” or “Sites of Conscience” are “historic sites, museums and memory initiatives that activate the power of places of memory to engage the public with a deeper understanding of the past and inspire action to shape a just future.” The Philadelphia Middle Passage Ceremony & Port Marker Project submitted the request to UNESCO for consideration as a Site of Memory and has been granted permission to use the official logo.

This designation occurs in conjunction with national and international commemorations of the 400th Anniversary of the first documented arrival of captive Africans to the English North American colony of Virginia in 1619. Several Philadelphia organizations are unfolding plans for events in 2019 to commemorate the 400th Anniversary. I urge the City of Philadelphia (and the Special Committee on 400 Years of African American History) to place the significance of this historical event within the context of its own role in the Slave Trade, the role of the slave trade in the founding of the City as well as the Nation, and the impact of silencing this history on descendent communities.

The UNESCO designation affords our City with a unique opportunity for critical analysis and dialogue needed to address historical dissonance and historical trauma in our divided society.

The Port of Philadelphia on the Delaware River is one of more than 175 Middle Passage ports–ports of entry for enslaved Africans during the 350 years of the transatlantic human trade, in 50 nations of North, Central, and South America, the Caribbean, and Europe. Each year since 2013, The Philadelphia Middle Passage Ceremony & Port Marker Project (PhillyMPC) has observed Ancestral Remembrance Day on Penn’s Landing commemorating the nearly 2 million Africans who perished in the Middle Passage. On August 5th, 2016 a new historical marker “The Pennsylvania Slave Trade” was unveiled on Penn’s Landing, thanks to a nomination submitted by Charles Blockson, Curator Emeritus of the Charles L. Blockson Afro-American Collection, with letters of support from the local community.

PhillyMPC continues to compile and disseminate research on the transatlantic slave trade (especially as it relates to Philadelphia), to hold healing and remembrance ceremonies and other events to encourage discussion, reflection and community initiatives toward reparation and reconciliation. PhillyMPC will celebrate Ancestral Remembrance Day 2019, with a series of events from August 5th to the 25th. We seek to work with other cultural, educational, civic and historical organizations to look critically at the institution of slavery in the Delaware Valley.

The Delaware River, flows through the African-American past and present. It represents the pain of the Middle Passage, our connection to Ancestral homelands across the Atlantic; the triumphant survival of the descendants of those Africans, and our call for healing and hope for future generations. 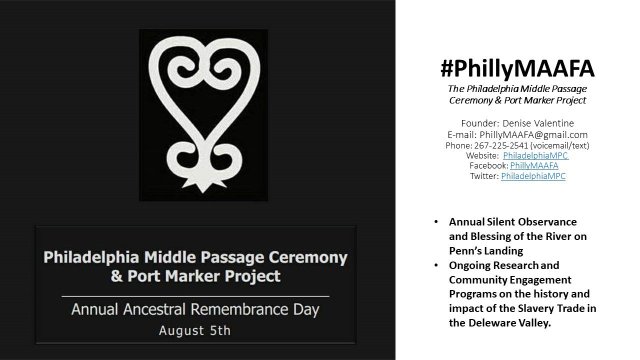 This site fulfils the quality criteria set by the UNESCO Slave Route Project in conjunction with the International Network of Managers of Sites and Itineraries of Memory.